Last year, Historic Collections of Devon & Cornwall Police Heritage & Learning Resource volunteer Peter Hinchliffe researched a piece on the officers of the Devon & Cornwall Police constituent forces who lost their lives in the First World War.  As Peter noted, this was a particularly tricky piece of research for a variety of reasons; the first being that in 1914, the police force in Devon & Cornwall was completely different to the one we know today:

Secondly, all police officers entering the military during the First World War were required to resign their position before joining. This means that we hold no comprehensive record of all those from the various forces who served, or indeed lost their life.

Following publication of the original article by volunteer Peter Hinchliffe last year, we were forwarded information from Tiverton Museum of Mid-Devon Life that enabled us to update our record of officers killed to include a PC Frederick James Beer (Private 8251 Coldstream Guards), who was killed on the 5th November 1914 and is buried in Sanctuary Wood Cemetery, Belgium. Mark Rothwell also contacted us to alert us to the reference in the West Briton & Cornwall Advertiser of 23 December 1920 to several (although unnamed) officers from Truro City Police who resigned their positions to go to war. Previous to this we had no record whatsoever of Truro City Police and WWI.

Now, we have been contacted by Trevor Finbow, who found document from a thanksgiving service for the members of Plymouth Constabulary who served in, or lost their lives in, the First World War. This names four men as having died; W.J. Wyatt, E.C. Southecombe, J. Norman and C. Darch (see image below). 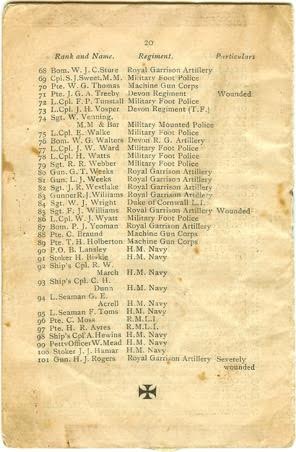 We will now be able to update our own records to reflect this new information. If you can add to the original list, please do not hesitate to contact us.

View all posts by devonandcornwallpoliceheritagecollection