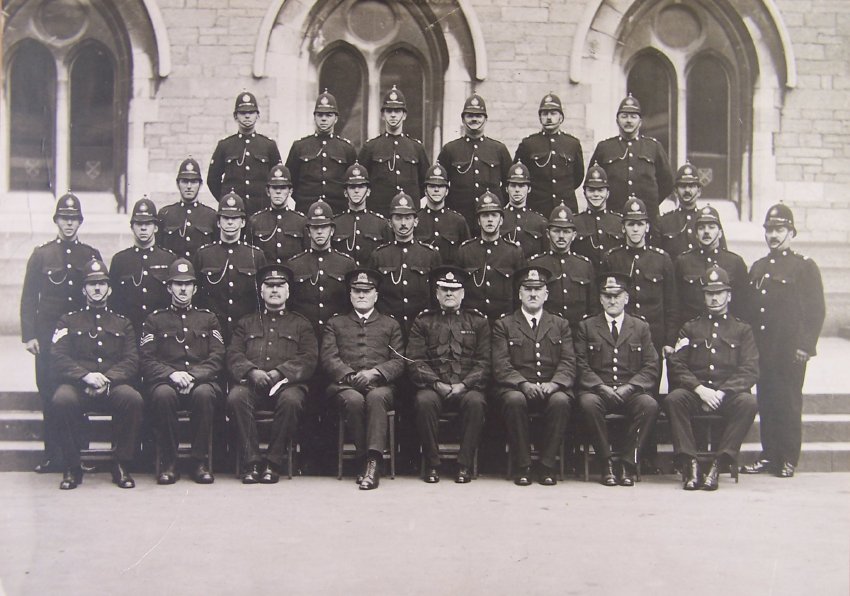 Few Chief Constables of the United Kingdom could claim to have found the time to serve the public as both public servants and philanthropists. Even in the face of dreadful poverty, serious crime and a significant upheaval in his force‘s history, Herbert Hards Sanders did this and more. Police Staff Mark Rothwell has researched the life of the Chief Constable of Plymouth Borough Police who took over from J.D.Sowerby in 1917 and saw Plymouth achieve city status in 1928 (you can read Mark’s article on Sowerby here).

Header image: the only known photograph of H.H. Sanders in the Historic Collections of Devon & Cornwall Police. Sanders appears in a group portrait with Devon Constabulary officers; Sanders is in the front row. Catalogue number 1975.00377.001.

H.H. Sanders was born into a police family in Dover, Kent, in 1873 to Thomas Osborne Sanders and Eliza Ann Batcheler (i). His father, at the time of Herbert’s birth, was the Chief Constable of the Dover Police (ii). As a young man Sanders sought a career in local industry, becoming a member of the clerical staff at W.H. Crundall & Company, a Dover timber merchant. On 3rd August 1888 the family would suffer tragedy when Herbert’s brother Steven was murdered in Ladonia, Texas. Their father was notified by telegram by the Texas authorities that his son had been “foully murdered” and the offender had been caught (iii). In 1899 he married Bertha Kemp and with her had three children, Thomas, Bertha and Herbert.

In 1894 he joined the London Metropolitan Police, where he would quickly establish himself as an excellent crime investigator, working his way up the ranks to Divisional Chief Inspector at Special Branch (iv, v). His most high profile cases include the investigation into the theft of the Irish Crown Jewels in 1908, and arrests linked to the Mile End, Poplar and Stepney Guardians. In the years leading up to the First World War, Sanders was sent to Dieppe, France, to begin the investigation of Bertha Trost, who was suspected to have been feeding government secrets back to the German Empire. The case also saw Sanders arrest Baron von Elssen (the German Governor of Brussels) for ordering the execution of a nurse, and Nathalia Janotha, also known as “the Kaiser’s Court Pianist,” who was suspected to have been collaborating with a spy amongst the staff of Prime Minister Neville Chamberlain. It was thought she was sending information back to Germany on the bestowing of British titles.

H.H. Sanders came to the Westcountry in 1917, succeeding Joseph Davidson Sowerby on 1st April as Chief Constable of the Plymouth Borough Police. As a Chief Constable, Sanders was a strong advocate for change and an evolution of the police force’s values and traditions. His predecessor at Plymouth, the aforementioned J.D. Sowerby, had already taken significant steps to improve the pay and conditions of his officers, and Sanders’ intentions were much the same.

In 1919, Sanders appointed two women regular police officers into the force. They were Audrey J. Canney and Isobel F. Taylor, employed as Inspector and Constable respectively (vi). From the point of view of the Police Watch Committee, this was an unpopular choice, but Sanders resisted calls to dismiss them. This would be the first of many occasions that he would put the best interests of his officers to the fore, and continued to resist any proposed changes to pay and working conditions that would impact negatively. He was a strong supporter of the individual needs of his officers and ensured that they were properly outfitted and rewarded (vii). He encouraged those under his command to be philanthropists, Samaritans and “good sports,” and held the unwavering belief that no police officer could be good at his job without first being a good sportsman (viii).

Common at the time, the Chief Constable also held the role of Chief Fire Officer, and so H.H. Sanders was responsible for the administration of the Fire Brigade in Plymouth. By the time of his appointment, the Plymouth Fire Brigade was mostly ill-equipped, and it would be H.H. Sanders who would provide the city’s firemen with uniforms, extra fire-fighting equipment and Plymouth’s first motorised fire engine. In 1921 he introduced a fire alarm system across the city which allowed any member of the public to alert the Fire Brigade to an incident.

Around the same time he introduced police call boxes to allow the public to communicate easier with the police, fire and ambulance services (ix). In 1923 Sanders opted to change the way police officers would be trained, by sending them to the Birmingham City Police where facilities were better. Sanders and his colleagues in the Police Watch Committee concluded that Plymouth lacked adequate buildings to train a large amount of officers at once, something the city of Birmingham was not in short supply of. Moreover, the officers would be paid by the Birmingham force for their time, which would consist of long twelve hour shifts of intense training, something the Police Watch Committee would highlight as a cost-saver for the police budget. At the time of the decision, the strength of the force numbered 280 regulars, with a report from the Chief Constable indicating the force was approximately thirty under the desired strength (x).

In the early 20th Century, Plymouth had a severe problem with poverty, in no small part due to the massive influx of paupers arriving at the Devonport Dockyard on an almost weekly basis. Sanders took pity on the poor and distressed, and in 1928 requisitioned a building at the dockyards for personal use. Poor persons were encouraged to send their clothing there for repair, which was carried out by Mrs Sanders and a small group of her friends (xi). Further efforts would see the raising of considerable amounts of money for relief of the poor, seeing in over one thousand cases of extreme poverty per year of his tenure.

H.H. Sanders was known for his jollity and generosity, and rewarded officers and the public alike for acts of good work and bravery. On 23 January 1925 a number of Plymouth Borough Police officers came under attack from a mob of soldiers who had spilled out of Stonehouse Barracks. A group of civilians came to the aid of the officers, who were being bombarded by stones and broken bottles. Sanders commended the men who came to their aid and presented them with gifts of money in a ceremony in April of that year (xii).

Pictured below, Sanders is seen sharing a laugh with Plymouth resident Lillian Hicks, whom had come to the aid of Constable Baldwin when he came under attack from two men. Miss Hicks managed to force her way into the ruckus and got hold of Constable Baldwin’s whistle allowing her to call for assistance. For her bravery, Sanders awarded her a gold watch (xiii).

His association with the London Metropolitan Police brought benefits to his command, and Sanders sought a closer working relationship between the two forces. On 9 February 1922, Sanders and a large number of Plymouth police officers attended the annual dinner of the Devonport Division Metropolitan Police Recreation Club at the Grand Hotel, Plymouth. In a number of speeches by the Mayor of Plymouth, H.M. Dockyards’ Rear-Admiral Underhill and Chief Constable Sanders, a great comradeship was observed between the two forces (xiv).

One his most significant achievements whilst in Plymouth was the founding of the Plymouth Police Widows and Orphans fund, and frequently held fundraisers at the Plymouth Guildhall (xv and xvi). In 1929 Sanders advocated the introduction of automated traffic lights to free police constables from point duty (xvii). In May of that year the Commandant of the Plymouth Special Constabulary Mr W.C. Payne retired, and Sanders subsequently brought the running of the organisation under his own (xviii).

“BE CIVIL TO THE POLICEMAN…”

Sanders was a supporter of road safety, and regularly gave talks on the matter to schoolchildren and the general public. He rendered considerable service to the National “Safety First” Movement in London and in Plymouth, and was a member of the Schools Propaganda Committee, the Public Safety Committee and was the founder of Plymouth’s own “Safety First” initiative, which empowered the police to give talks to the public and schools on road safety. In an interview with the Western Morning News on 9 March 1929, Sanders said:

Be civil to the policeman, and he will be civil to you. Remember the policeman on point duty has a very difficult task. Don’t make it more arduous by asking him questions. Don’t pull up and leave your car on the wrong side of the road. It is always dangerous to pass a stationary tramcar on the near side. There is great improvement in the driving of motorists compared with five years ago. Help it to improve still more.

Sanders was in charge when Plymouth achieved city status in 1928, and accordingly the Plymouth Borough Police was renamed Plymouth City Police. In May 1929 Sanders personally escorted visiting Prime Minister Stanley Baldwin and his wife Lucy to The Grand Hotel (xix). In July 1929, Sanders tendered his resignation to the Police Watch Committee, citing his wife’s failing health as the reason for his retirement (xx). On announcing his retirement he paid special thanks to his colleague Superintendent Cooms, who had been Sanders’ right-hand man for many years, and had run the force whenever Sanders had cause to be absent.xxi He officially stood down on 30 September, and was permitted to keep his uniform as a souvenir of his service (xxii). He was succeeded by Archibald Kennedy Wilson, former officer of the Carlisle Police.

H.H. Sanders died in Hove, Sussex, in July 1941, aged 68 (xxiii). He was cremated in Brighton on 18 July, an event which was well-attended by members of the Plymouth police.

vi “The Police Service in Plymouth” by Brian Moseley

xix “The Demonstration At Plymouth” Western Morning News 14 May 1929

View all posts by devonandcornwallpoliceheritagecollection